The key to the rapid growth of Georgia's Children of the World has been down our careful choice of like minded partners at home and around the world. All our partners are dedicated small organisations driven by volunteers and lead by some amazing people whose focus is to help the world become a better place while attempting to break the cycle of poverty amongst Children of the world.

POSITIVITY POWER MOVEMENT are one of our Global partners. Through the work of their Love Care Share foundation they will be supporting our on-going work.  We are delighted they have chosen Georgia’s children of the World to be their first beneficiary. The royalties from their first book project ‘The Transformative Power of Near Death Experiences" by Dr Penny Sartori and Kelly Walsh and other projects they have in the pipeline will support projects, just like ours aimed at making a positive difference in children's lives around the world.
We have no doubt that this is just the beginning of a beautiful partnership that is ... Driven by Love and Guided by Angels !

CHOICE CAMBODIA is an amazing organisation based in Phnom Penh Cambodia and became the very first partner of Georgia's Children of the World in December 2011.Thanks to CHOICE, Georgia's House 1 , a classroom at the CHOICE CENTRE in Kandal Province became a reality in February 2012.

CHOICE Cambodia provide Water Healthcare Education and Nutrition to 3 villages in the province that up until 6 years ago , these people had no access to any of these things.

Now thanks to CHOICE and support of Georgia's Children and other friends around the world these families receive deliveries of safe drinking water, transportation to and from school and Kindergarten , English and Computer lessons at The CHOICE centre.

CHOICE have recently been able to purchase some land close to the existing centre which is rented and therefore only a temporary solution.
The new land requires several new buildings including a new school house that Georgia's Children , the Positivity Power Movement and other fiends of CHOICE intend to build over the next few years.
THE LIFECENTRE based in Salford became Georgia's Children of the World's most recent partner in 2015 , when following the success of Georgia's Houses 1 to 4 overseas we returned to Salford , Georgia's true home and established Georgia's House 5 upstairs at the Lifecentre which also enabled the Lifecentre to expand their existing projects.
From Georgia's House we 5 we run our hugely successful FREE SCHOOL UNIFORM project , working alongside Salford and Manchester  City councils we have provided over 1,000 Free School uniforms to underprivileged children that are referred to us by the Councils.

We also support the LIFECENTRE with their Breakfast Club , that provides a free breakfast and emotional support to children who otherwise would have to face going to school every morning on an empty stomach and often carrying the stresses of a difficult home life with them.

More recently we have been able to support the LIFECENTRE by bringing along friends of Georgia's Children to Volunteer at their "MAKE LUNCH" project which feeds some of the 700 children in Salford on Free school Dinners , that often have no lunch at all during school holidays. 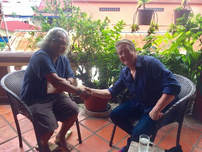 BUILD YOUR FUTURE TODAY , became our second partner in Cambodia in 2013 , based in Siem Reap one the poorest provinces in Cambodia despite being home to the world heritage site of Angkor Wat. BFT lead bt an incredible man by the name of Sedtha Long , who survived the atrocities of the Khmer Rouge in the 1970's, to become a Professor and Humanitarian, leading a team of young dedicated  young people to support some the poorest Children in the World.


Our first project with BFT was Georgia's House 2 , a mother a child community centre , for a very poor community not too far from the city providing, kindergarten, healthcare  education to young mothers and English lessons to local Children.

In 2014 we took on our most ambitious project to date under the guiding hands and management of BFT ,, Georgia's Children of the World funded the building of Georgia's House 3, a school building in the remote village of Oroong , 2 hours North East of Siem Reap. A village that has NO water , NO Sanitation , NO electricity and up till that point NO SCHOOL ! ... Now Oroong Village school has a well and toilets on site and is attended by 140 children with 4 local teachers.

Georgia's Children helps to fund the teachers salaries and provides BFT with the funding to ensure the children get to eat at least one nutricious meal a day ... We will return to Oroong in 2018 to build 2 more classrooms and complete the school that is a true landmark of Georgia's legacy.